As coronavirus cases have surged, so have the number of companies asking their employees to work from home, and technologies like Hologram Object Projection will prove as milestones in facilitating work from home by projecting users in a 3D space.

The Hologram is a Three Dimensional projection of an object that exists freely in space and is visible to everyone without the need for 3D glasses. Based on Mixed Reality, the concept is a combination of elements of Augmented Reality and Virtual Reality.

How It Works: The camera from the iPhone captures the person who is in the real world. This is taken as an input by the Body Tracked Entity that eliminates all the background images and takes out the person from the complete picture. From this Body Tracked Entity, all the Joint Transformations which have been captured from the person is fetched. These joint transformations are then broadcasted to other peer devices. There can be ‘n’ number of devices and can be projected at the very same time. For transferring these projections, the data packets are archived and compressed before the transfer happens to fetch the original Transformations. The Transformations are being sent to Hologram so that it can mimic the very same action. 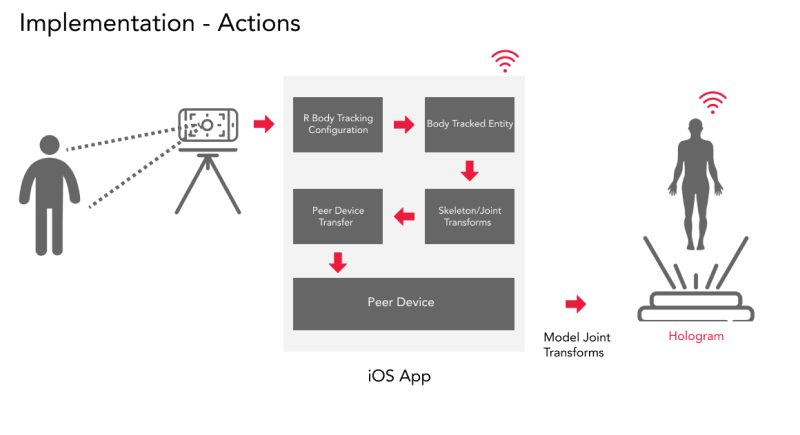 Conclusion: Hologram Object Projection makes use of the latest technologies and eliminates the need for the physical presence of entities, be it sports, health, or entertainment. The idea is yet to explore more avenues and will undergo many transformations to make it more user-friendly.