An unconventional idea based on technologies like Deep Learning, Neural Network, and Machine Learning, AutoWite MOM aims to appease the inconvenience of manually writing minutes of the meeting.

Meetings are integral, from giant corporations to small enterprises organize meetings for various reasons. Although a routine activity, it has its set of challenges that can, at times, mar the overall purpose. One of the biggest is writing the Minutes Of Meeting, which is usually the onus of the organizer, and a lot depends upon his skill to write fast and the ability to grasp. The story does not end here; the process gets cumbersome when the minutes need to be analyzed, segregated and emailed to all stakeholders in a predefined format.

AutoWirte MOM has adequately addressed all the issues that come with manual operation of MOM. The Application is easy to understand and methodical; therefore, it does not require much technical know-how to operate.

When compared with other tools, AutoWrite MOM generates minutes of the meeting by converting Speech to text, efficiently record the meeting, and recognize each team member’s voice, which is generally lacking in other similar tools.

How it works: AutoWrite MOM is very systematic and follows a set of steps to achieve its objective. Let us understand each in detail:

Step 2: Train model: Build a relationship between users and their voice 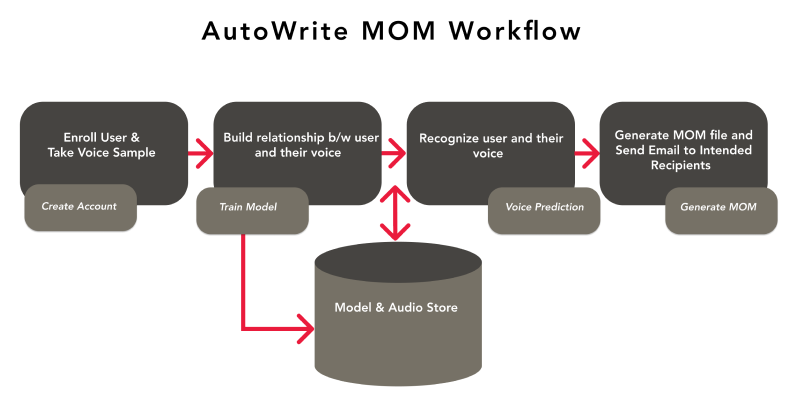 The Approach:  To begin the Application, the first logical step is to identify the speaker.

Speaker Identification: To train the model, the Gaussian mixture is used, which is trained on  Mel-frequency Cepstrum Coefficients (MFCC) feature; it’s a feature extracted from our voice.

Now we need to Identify who said what? For that we have used Speaker Diarization:

Later the output of Automatic Speech Recognition (ASR) and Speaker Diarization(SD) is reconciled, and the final output is generated where the speaker and what he said are identified.

AutoWrite MOM is a blessing for organizations where meetings are a day-to-day affair. The Application will also undergo specific future enhancements like tracking Action Items out of the conversation when it is mentioned explicitly in the meeting and a meeting scheduler. With its objective of exponentially reducing the hassle of manual MOM, the App will be an icing on the cake!!